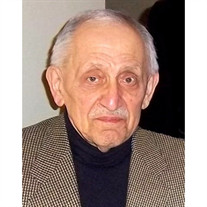 ROBERT COLANNINO, 90, of North Providence passed away peacefully on July 30, 2020 surrounded by his wife and family. Bob was born in the Mt. Pleasant section of Providence on January 15, 1930, the son of John and Elizabeth (Paolino) Colannino. After graduating from Mount Pleasant High School in 1948, Bob joined the 3rd Cavalry Regiment Army Unit nicknamed "Brave Rifles" and spent a total of 5 years full time and reserve duty. Bob later joined Jencks and Ballou as an architectural draftsman then branched off into the steel end of the construction industry, working as an estimator and trouble shooter in the field. During this time, he attended RISD and then Roger Williams Jr. College evening classes. During the 1970's Bob owned Cal's Liquors on Elmwood Ave. After that he and his friend Teddy Rampini started Metro Steel Erection in the mid-1980's which operated for 10 years. Finally, he worked at JD Cement until he was 89 years old. Bob was a long-time dedicated member of the OSIA Grand Lodge and the Sons of Italy Salvatore Mancini #2440. His many duties included serving as treasurer as well as volunteering his services. In 1984 he became a member of the Grand Lodge of RI and served as Trustee and Corresponding Secretary. For two years he was Chairman for the Grand Lodge Scholarship and Charity Benefit Raffle. He was also in charge of the weekly high low jack card session.  Bob dedicated much of his time to community service including filming the local cable cooking show Cucino di Nonna for his wife Gilda and friend Jean Restivo, volunteering for The Ronald McDonald House and driving the church bus for the Mary Mother of Mankind parishioners. He loved playing golf and exploring and keeping up with new technology. Bob and Gilda (Amicarelli) were married in Holy Ghost Church on September 6, 1952. He is survived by his wife; three sons and their spouses: Robert Colannino (Mark) of Kinderhook, NY, David Colannino (Mary) of Providence, RI, John Colannino (Becky) of Bangor, ME; six grandchildren: David, Meghan, Molly, Patrick, Nathan and Elizabeth. He was the brother of the late John Colannino, Evelyn Calderone and Sandra Resse. Relatives and friends are invited to attend a Mass of Christian Burial on Tuesday, August 4, 2020 at 11AM in St. Anthony Church, 1413 Mineral Spring Ave, North Providence. Burial will be private. Visiting hours are respectfully omitted. Due to state and local regulations, the church is limited to 80 attendees. In lieu of flowers, donations in Bob's memory may be made to:  Continuum Hospice & Palliative Care, 1350 Division Rd., Suite 205, West Warwick, RI 02893, www.continuumhospice.com.

ROBERT COLANNINO, 90, of North Providence passed away peacefully on July 30, 2020 surrounded by his wife and family. Bob was born in the Mt. Pleasant section of Providence on January 15, 1930, the son of John and Elizabeth (Paolino) Colannino.... View Obituary & Service Information

The family of Robert Colannino created this Life Tributes page to make it easy to share your memories.

Send flowers to the Colannino family.