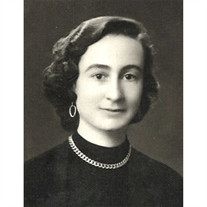 Yaldus S. Hasso, 95, of Warwick, RI passed away peacefully on Thursday, August 29, 2019. She was the wife of the late Dr. Haddy S. Hasso. Mrs. Hasso was born in Mosul, Iraq. She was the daughter of the late Sulaiman and Latifa (Jardack) Khoory. Mrs. Hasso graduated from Queen Alia Institute for Higher Education in Baghdad with a degree in Education. She worked as an Arabic and Religion teacher in Mosul, Iraq at the Syriac Orthodox Elementary School for Girls for 10 years and later moved to Baghdad, Iraq where she became Vice Principal of Al Tahtheeb Elementary School for 7 years until she became betrothed to her late husband and moved to the United States in 1962. Mrs. Hasso was a dedicated supporter of her faith and church both in Iraq and Rhode Island. She was a long time parishioner of St. Ephraim Syriac Orthodox Church in Central Falls, Rhode Island. Her spirituality was always fully expressed within and beyond her home because of her attachment to her church and its ancient traditions. One of the greatest joys in her life was spending time with her family, especially her only granddaughter Chanel. Yaldus instilled the values of her life journey with all those who knew and interacted with her. She also enjoyed an appreciation and talent for reading, knitting, cooking, and representing her love and spirituality with all her family, friends and acquaintances. She is survived and will be forever remembered by her daughter, Ann Marie Thatcher and her husband Scott; her granddaughter, Chanel Khoury; two brothers, Fadi Khoory and Dr. Maged Khoory; and her sister Suad Al Khoory. She was the sister of the late Antoine Khoory, Joseph Khoory and Nuhad Al Khoory Sulaiman. Relatives and friends are invited to attend a Syriac Orthodox funeral service to be held on Friday, September 6, at 10 o'clock, at St. Ephraim Syriac Orthodox Church, 215 Washington Street, Central Falls, RI 02863. Burial will be at the North Burial Ground, Providence, RI. In lieu of flowers, donations may be made to St. Ephraim Syriac Orthodox Church.

Yaldus S. Hasso, 95, of Warwick, RI passed away peacefully on Thursday, August 29, 2019. She was the wife of the late Dr. Haddy S. Hasso. Mrs. Hasso was born in Mosul, Iraq. She was the daughter of the late Sulaiman and Latifa (Jardack) Khoory.... View Obituary & Service Information

The family of Yaldus S. Hasso created this Life Tributes page to make it easy to share your memories.

Send flowers to the Hasso family.