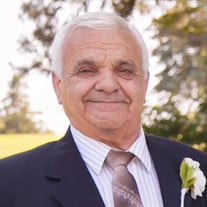 Vincent Mambro, 87, of Providence, passed away Thursday, December 15, 2022 at Rhode Island Hospital. He was the beloved husband of the late Dolores (Zannella) Mambro for over 57 years. Born in Rocco d’Evandro, Italy, he was the son of the late Rocco and Maria Teresa (Rossi) Mambro.

Mr. Mambro worked for the City of Providence as Supervisor for the Department of Public Property for 15 years before retiring in 2004 and was a member of Laborers Union Local 1033. Prior to working for the city, he worked for Imperial Knife for over 30 years as Head Foreman. Vinny was an avid vegetable gardener and craftsman and enjoyed making his own wine.

His funeral will be held Wednesday, December 21, 2022 at 9 a.m. from the MACERONI FUNERAL HOME, 1381 Smith St., North Providence, followed by a Mass of Christian Burial at 10 a.m. in Holy Ghost Church, Atwells Ave., Providence. Entombment will follow in St. Ann Cemetery Mausoleum, Cranston. Visitation will be held on Tuesday from 5 – 7 p.m. In lieu of flowers, donations in Mr. Mambro’s memory may be made to: St. Jude Children’s Research Hospital, 501 St. Jude Place, Memphis, TN 38105.
To order memorial trees or send flowers to the family in memory of Vincent Mambro, please visit our flower store.