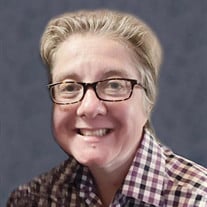 TC Rogers, 46, of Providence, passed away unexpectedly on Friday, January 13, 2023. TC was the wife of Andrea Dougherty and the devoted mother of Samantha Dougherty-Rogers, their greatest source of joy. TC was born in Providence and was the daughter of Richard D. and Sharon A. (Guglielmo) Rogers.

TC graduated from Johnston High School in 1994 and graduated with a BA in Communications from Regis College in 1998. TC went on to earn a MA in English Literature from Goldsmith College, University of London in 2003, living abroad in London during that time. After working for several years, TC earned a Doctorate in Education from Northeastern University in 2014.

TC is also survived by sister Tabitha D. Sluter, brother-in-law Ethan Sluter, maternal grandmother Antonetta Guglielmo, as well as her nieces Gabriella and Gloria and nephew Angelo Sluter. TC also leaves best friend Philip Cordeiro of Farmington, CT, and numerous close aunts, uncles, cousins and extended family and friends, as well as beloved dogs Addie & Bear. TC was a vibrant presence at all gatherings and was adored by all.

TC began a career in higher education as the Director of the Women’s Center at Johnson & Wales University.

TC later served as Department Chair in Academic Development at Benjamin Franklin Institute of Technology in Boston. TC received national attention at BFIT for research work in Project Based Learning. TC's passion and focus was to empower students to claim their education.

Eventually TC returned to Johnson and Wales in the position of Academic Director of Online Services as well as an Adjunct Professor.

TC recently began a career in construction and real estate development, becoming a licensed Contractor in Rhode Island. As the owner of Mulberry Properties, TC worked for five months to complete a gut renovation of a historic three-story, two-family house in Providence. This was an incredible undertaking for a new builder and the results were nothing short of astounding, as the house sold immediately. TC was excited to explore new construction projects. Putting the newfound building expertise to work, TC recently assisted as a volunteer for stage and set construction at the Wilbury Theatre Group, for the play "The Humans".

TC had incredibly high self-expectations and self-discipline, but at the same time was remarkably supportive to the needs of others, living life without judgment but rather with compassion, love and good humor. TC had a life force that attracted many people and had strong connections to friends and colleagues.

TC was a strong advocate for the LGBTQ+ community. TC served as board President of Options Magazine. TC was an innovative educator, education researcher and consultant, writer and editor, poet, activist, and public speaker. TC was politically active in the community, most recently supporting a local mayoral candidate which included putting together fundraisers and events.

TC was a devoted and active parent within The Gordon School community. Since 2014, TC was a constant presence on campus, an active volunteer and a proud and encouraging parent. TC was selfless in her desire to help others in ways large and small, whether by co-chairing the Book Fair three years in a row, adding her voice to the conversation on the Education Committee, or by helping bail out a classroom during a summertime flash flood.