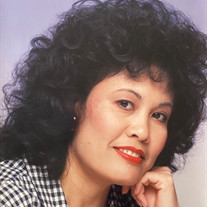 Rosario Burgess (Saceda), 71, of North Providence, passed away Thursday, March 31, 2022 at Roger Williams Medical Center. Born in Cebu City, the Philippines, she was the daughter of the late Genaro Saceda, Sr. and Marciana (Dacay) Saceda. Rosario was a quality control inspector at Mine Safety for 20 years. She was a member of the Missionary Family of Christ of Rhode Island, Mary, Mother of Mankind Church and the North Providence Senior Center. She is survived by her brothers, Bernardo Saceda, Olegario Saceda and Crispin Saceda: her sisters, Melona Domenicone, Estela Brown, Imelda Wall and Jasmin Hawkins. She was the sister of the late Genaro Saceda, Jr. and Irene Leys. Her funeral will be held Tuesday, April 5, 2022 at 8:30 AM from the Maceroni Funeral Home, 1381 Smith St., North Providence, followed by a Mass of Christian Burial at 9:30 AM in Mary, Mother of Mankind Church, 25 4th St., North Providence. Entombment will be in Highland Memorial Park, Johnston. Visiting hours are Monday from 4-7 PM.

The family of Rosario Burgess created this Life Tributes page to make it easy to share your memories.

Send flowers to the Burgess family.