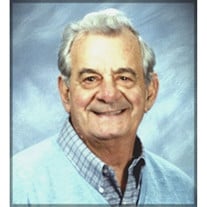 Romeo Varone, 90, of North Kingstown, passed away peacefully at home on Friday, May 10, 2019.  He was the beloved husband of Janet M. (Schiano) Varone for 66 years.  Born in Barrington, he was the son of the late Pasquale and Mary (Gasbarro) Varone. Mr. Varone worked for Gasbarro Wholesale Liquors for many years before retiring.  He was a proud Army Veteran of the Korean War.  He was a loving and devoted husband, father and grandfather. Romeo flourished in retirement. As a talented golfer he always enjoyed the game. He taught himself to play the organ, loved to draw and share these gifts with his family. He also had an insatiable curiosity to explore electronics and computers. If there is a way to reach the end of the internet, Romeo was probably just a few days away. He had a renowned sense of humor. His natural ability to mangle words to create the perfect expression of the sentiment he wanted to convey was as masterful as it was spontaneous. Romeo added words to our vocabulary that we will never forget. In addition to his wife, he is survived by his daughter Karen Connors and her husband, Kenneth; his son, Ronald Varone and his partner, Janet Pratt;  and three grandchildren, Nicholas Varone, Patrick Varone and Ceilí  Connors.  He was the brother of the late Furrie, Edmond, Michael and Joseph Varone, Clara Vellone and Elizabeth Parisi. He is also survived by many loving nieces and nephews. Visiting hours will be held Tuesday Morning, May 14, 2019 from 9 a.m. to 10:15 a.m. in the MACERONI Funeral Home, 1381 Smith Street, North Providence, followed by a Mass of Christian Burial at 11:30 a.m. at St. Bernard Church, 275 Tower Hill Rd., North Kingstown.  Burial with Military Honors will be in Rhode Island Veterans Cemetery, Exeter.  In lieu of flowers, donations in Mr. Varone's memory may be made to the  charity of your choice.

Romeo Varone, 90, of North Kingstown, passed away peacefully at home on Friday, May 10, 2019.  He was the beloved husband of Janet M. (Schiano) Varone for 66 years.  Born in Barrington, he was the son of the late Pasquale and Mary (Gasbarro)... View Obituary & Service Information

The family of Romeo Varone created this Life Tributes page to make it easy to share your memories.

Send flowers to the Varone family.