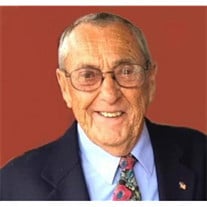 Richard J. Raczelowski, 87, of North Providence, passed away at Rhode Island Hospital on Sunday, August 29, 2021. He was the beloved husband of Carolyn A. (Agnello) Raczelowski for 57 years. Born in Providence, he was the son of the late Anthony and Sabina (Malkowski) Raczelowski. Richard worked for the State of Rhode Island, Department of Transportation as a resident engineer for over twenty years before retiring. He served as secretary, treasurer, union rep and steward of Local 400 I.F.P.T.E. at the RIDOT. An Army Veteran, he served in the US Army's 25th Infantry Division. After completion he joined the Rhode Island Army National Guard where he served an additional twelve years. He was a graduate of St. Raphael Academy, Roger Williams Junior College and Roger Williams College. Richard was a member of the North Providence Fraternal Order of Police Association and the RI State Police Association. He is also a member of the Knights of Columbus, 3rd degree, Dillion Council. Richard's favorite place in the world was Sebago Lake, Maine where he first visited as a child with his family. He fell in love with the Lake and carried on that yearly tradition with his children and grandchildren for his entire life. Richard was an avid golfer and bowler involved in league play for many years. He was a lifelong Boston Red Sox and New England Patriots fan. Above all, he was a devoted husband, loving father and adoring grandfather; and a loyal friend to many. In addition to his wife, he is survived by his son, Richard J. Raczelowski, his daughter, Ronna Hannagan and her husband, Timothy; three brothers, Gerald, Thomas and Stanley Raczelowski; and his three cherished grandchildren, Anthony Hannagan, Ava Hannagan and Ella Raczelowski. Visitation will be held on Friday, September 3, 2021 from 4 - 7 p.m. in the Maceroni Funeral Home, 1381 Smith St., North Providence. Relatives and friends are invited to attend a Mass of Christian Burial on Saturday, September 4, 2021 at 9:30 a.m. in Mary, Mother of Mankind Church, 25 Fourth St., North Providence. Burial will follow in Gate of Heaven Cemetery, East Providence. In lieu of flowers, please donate to a charity of your choice in Richard's name or perform an act of kindness in his memory.

Richard J. Raczelowski, 87, of North Providence, passed away at Rhode Island Hospital on Sunday, August 29, 2021. He was the beloved husband of Carolyn A. (Agnello) Raczelowski for 57 years. Born in Providence, he was the son of the late Anthony... View Obituary & Service Information

The family of Richard J. Raczelowski created this Life Tributes page to make it easy to share your memories.

Send flowers to the Raczelowski family.