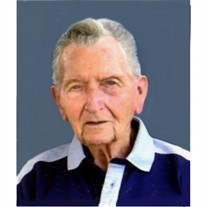 Raymond Carlino, 94, a resident of North Providence, passed away peacefully on April 25, 2019 at his home surrounded by his loving family. Raymond was born in Providence, Rhode Island and was the son of the late Domenico and Angelina Valente Carlino, both of whom immigrated to Rhode Island from the Casino region of Italy. Raymond was the third of five children.  He and his older two brothers the late Ralph Carlino and the late Armand Carlino each served in World War II. Raymond served in the United States Navy in the pacific theater and was involved in the Battle of Iwo Jima. Raymond was particularly close to his younger brother Eugene Carlino. The two of them worked together in several different business ventures. Over the last several years they typically had lunch or dinner together each day. Despite coming from very humble beginnings, Raymond worked up to become an executive at Prudential Life Insurance Company. He enjoyed his retirement years in Pompano Beach, Florida, with his wife the late Edith Carlino, whom he cherished and adored.  Raymond is survived by his two sons, Robert Carlino and his fiancée, Gladys and Raymond Carlino.  He loved spending time with his family, especially his two grandchildren Michael and James.  He is also survived by his sister-in-law Mary Carlino; his brother Eugene Carlino and his companion Linda Paolino; his sister Elena Carlino; his nieces Diane Ciccarone and Tina Carlino; and his nephews Ralph Carlino, Jr., Steven Carlino, Eugene Carlino, II, and James Carlino; and several great nieces and great nephews. Visitation will be held Wednesday Morning, May 1, 2019 from 8:30 - 10:00 a.m. in the MACERONI FUNERAL HOME, 1381 Smith St., North Providence followed by a Mass of Christian Burial at 11 a.m. in St. Mary Church, 1525 Cranston St., Cranston.  Burial with Military Honors will be in St. Ann Cemetery, Cranston.  In lieu of flowers, donations in Raymond's memory may be made to: Wounded Warrior Project, PO Box 758517, Topeka, Kansas, 66675-8517.

Raymond Carlino, 94, a resident of North Providence, passed away peacefully on April 25, 2019 at his home surrounded by his loving family. Raymond was born in Providence, Rhode Island and was the son of the late Domenico and Angelina Valente... View Obituary & Service Information

The family of Raymond Carlino created this Life Tributes page to make it easy to share your memories.

Raymond Carlino, 94, a resident of North Providence, passed away...

Send flowers to the Carlino family.