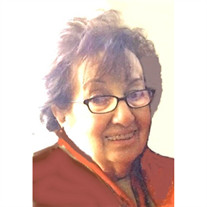 Pauline T. Torregrossa (Tomaselli), 90, of North Providence, passed away peacefully on Saturday, December 26, 2020. She was the wife of the late Joseph A. Torregrossa. Born in Providence, she was the daughter of the late Luigi and Pasqualina (Nicolorgio) Tomaselli. Mrs. Torregrossa earned her bachelor's degree from URI and worked for Fleet Bank for many years before retiring. Pauline was a passionate reader and shared her love of books with her children and grandchildren. This love of books led to her involvement with the North Providence Union Free Library as the president of the Friends of the NP Union Free Library and later as a member of the Library's Board. After experiencing as a grandmother the good work done by the Ronald McDonald House Charity, she became a dedicated volunteer at the Ronald McDonald House in Providence. Pauline loved to sing and would often burst into song with her sister, Angela. She taught her grandchildren to sing show tunes from the 40's and 50's. As a long time member of the St Anthony's Church Choir in North Providence, she and her dedicated fellow choir members and dear friends raised their voices in fellowship on Sunday mornings. A loving and devoted mother, grandmother and great-grandmother, she is survived by her three children, Patricia McNamee and her husband, John, Joseph Torregrossa and his wife, Gale and Christopher Torregrossa; and five grandchildren, Caroline (McNamee) Stinziano and her husband, Michael, Cameron McNamee, Patricia Torregrossa, Amy Zock and Kristen Zock. She is also survived by her cherished great-grandchildren, Cooper and Riley Stinziano; and many nieces and nephews. She was the sister of the late Anthony Tomaselli, Angela Torregrossa, Evelyn Calitri and Josephine Scordato. Mrs. Torregrossa's funeral and burial will be private and visitation is respectfully omitted. Donations in her memory may be made to: Ronald McDonald House, 45 Gay St., Providence, RI 02905.

The family of Pauline T. Torregrossa created this Life Tributes page to make it easy to share your memories.

Send flowers to the Torregrossa family.