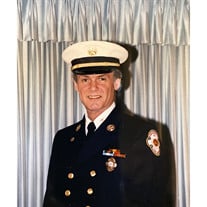 Paul A. Wentworth, 77, of Seekonk, MA, formerly of Cranston, RI passed away at home on June 25, 2021. He was the beloved husband of Carolyn (Cappuccilli) Wentworth for nearly 50 years. Born in Providence, he was the son of the late Charles and Dorothy (Gilman) Wentworth. From 1965-1971, he served in the Coast Guard Reserve as a second class gunner's mate. Following in his father's footsteps, he served as a member of the Pawtuxet Volunteer Fire Company for 4 years prior to joining the Providence Fire Dept in 1967. He served as a Firefighter on the Providence Fire Department for 36 years, rising to the ranks of Deputy Assistant Chief. Following his retirement in 2003, he went on to work at the RI Emergency Management Agency serving as a domestic preparedness planner. He was a member of the International Association of Firefighters, the RI Association of Fire Chiefs, and the Police and Firefighter's Retirement Association. He was also a trained carpenter and cabinet maker. In his retirement, he enjoyed gardening, growing blueberries, photography and spending time with his family and friends. In addition to his wife, he is survived by his loving daughters, Julie Wentworth of Somerville, MA and Amy Woodward and her husband, Andrew of Franklin, MA; 2 sisters, Jane Kilday of North Kingstown, RI and Barbara Platt of Tiverton, RI; his brother Alan Wentworth of Hubert, NC; his sister-in-law Carolyn Cappuccilli of Providence, RI; his cherished grandson, Hunter Woodward, and numerous nieces and nephews. His funeral will be held on Friday, July 2, 2021, at 9 a.m. from the Maceroni Funeral Home, 1381 Smith St., North Providence, followed by a Mass of Christian Burial at 10 a.m. in St. Thomas Church, 65 Fruit Hill Ave., Providence. Burial will be in St. Ann Cemetery, Cranston. Visitation will beThursday July 1 from 4 - 7 p.m. In lieu of flowers, donations in Paul's name may be made to: Development Office, Shriners Hospitals for Children - Boston, 51 Blossom Street, Boston, MA 02114. maceroni.com

Paul A. Wentworth, 77, of Seekonk, MA, formerly of Cranston, RI passed away at home on June 25, 2021. He was the beloved husband of Carolyn (Cappuccilli) Wentworth for nearly 50 years. Born in Providence, he was the son of the late Charles and... View Obituary & Service Information

The family of Paul Arthur Wentworth created this Life Tributes page to make it easy to share your memories.

Send flowers to the Wentworth family.