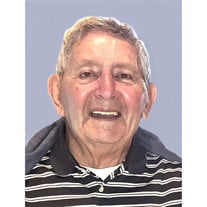 Michael D. Falcone, 89, of Lincoln, passed away Sunday, September 27, 2020 at HopeHealth Hulitar Hospice Center in Providence. He was the beloved husband of Joan (Gormly) Falcone. Born in Providence, he was the son of the late Pasquale and Anna (Felch) Falcone. Mike was a Navy Veteran of the Korean War. He started his career in the construction industry selling building materials at the former Manchester and Hudson Co. He spent the majority of his work life as a consultant in the construction industry. Later, he worked as a facilities manager for the Diocese of Providence, retiring in 2015. Mike had an intense passion for flying and sports cars. He was affiliated with the RI Pilots Association, Aircraft Owners and Pilots Association and the Quiet Birdmen (QBs). He received the Wright Brothers Safety Award for 50 years of flying without incident. He was a founding member of the local chapter of the Sports Car Club of America where he was active in racing in the New England area, receiving many awards. Besides his wife of 60 years, he is survived by his daughters, Lee-Ann Falcone-Maroni (Patrick), Lynda Falcone and Laura Falcone; a son, Michael D. Falcone, Jr., and a sister, Teresa Sleeper of Dallas, TX. Visiting hours will be Monday morning, October 5, 2020 at Maceroni Funeral Home, 1381 Smith St, North Providence from 8-9:30 AM followed by a Mass of Christian Burial at 10m AM in St. Pius V Church, 240 Eaton Street, Providence. Burial at the RI Veterans Memorial Cemetery with Military Honors will be private. Donations in Mike's memory may be made to the McMinn County Living Heritage Museum, 522 West Madison Ave, Athens, TN 37303.

Michael D. Falcone, 89, of Lincoln, passed away Sunday, September 27, 2020 at HopeHealth Hulitar Hospice Center in Providence. He was the beloved husband of Joan (Gormly) Falcone. Born in Providence, he was the son of the late Pasquale and Anna... View Obituary & Service Information

The family of Michael David Falcone created this Life Tributes page to make it easy to share your memories.

Send flowers to the Falcone family.