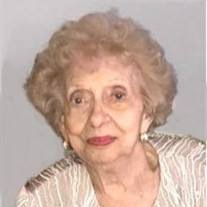 Maria J. Ranallo (Ferrazzano), 96, of Providence, passed away Thursday, January 20, 2022 at home surrounded by her loving family. She was the wife of the late Domenic Ranallo. Born in Providence, she was the daughter of the late Domenic and Carmella (D'Elena) Ferrazzano. She was a loyal and loving wife, mother, grandmother, great-grandmother, aunt and friend. She was a devoted Catholic who had immense faith in God. She is survived by her daughters, Victoria Chamberlain, and Valorie Brown and her husband Edward; a brother Thomas Ferrazzano; a sister, Antonette Ferrazzano; five grandchildren, Faith Costa, Giana Chamberlain, Domenique Laster, Brandon Brown and Tayla Brown, and a great-granddaughter Milani Laster. She was the sister of the late Gennaro Ferrazzano and his wife Marie, and an aunt of the late Domenic Ferrazzano. Her funeral will be held on Tuesday, January 25, 2022 at 9 AM from the Maceroni Funeral Home, 1381 Smith St., North Providence, followed by a Mass of Christian Burial at 10 AM in St. Augustine Church, 639 Mt. Pleasant Ave, Providence. Burial will be in St. Ann Cemetery, Cranston. Visiting hours are Monday from 4-7 PM. In lieu of flowers, donations in Maria's memory may be made to St. Jude Children's Research Hospital, 501 St. Jude Place, Memphis, TN 38105.

The family of Maria Ranallo created this Life Tributes page to make it easy to share your memories.