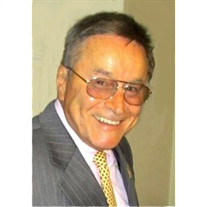 Louis Costa (84) went home to God on Saturday, February 20, 2021, after a long fought battle with cancer. He was the son of the late Antonio and Maria de Lourdes (Raposo-Silva) Costa. He is survived by his wife Judith (Soares) Costa and his 7 children: Louis (spouse Holly) Costa, Jason Costa, Jennifer Costa, Aaron (spouse Renee) Costa, Michael Costa, Timothy Costa, and Jessica (spouse Edward) Sciacca. His grandchildren, Isabella, Jacob, Cassondra, Olivia, Ava, Chloe, Emma and Charlotte were the delight of his life. He also counted Richard Scarpellino, Rocio Ferrante, Justin Paulhamus, Anu Manocha, and Mitchell Crispell among his children. He was the brother of Anthony, Edward, and Ernest Costa who preceded him in death and M. Elaine Conaty, his sister. He was the brother-in-law of Janet Costa, who preceded him in death as well as Louise Costa and Bernard Conaty, and was the uncle to many nieces and nephews. Lou had a distinguished military career in the Navy. Most of his 23 years were spent aboard submarines, including the first nuclear guided one, the Halibut. But his service also included the Korean Conflict and the Vietnam War as a member of SEAL Team 2. Before retiring as a Chief Petty Officer (ICC), he was in charge of all communications in the Far East at the Negeshi Microwave Station in Yokohama, Japan. He was inducted into the Holland Club for submarine veterans in 2005. His military career was followed by years as an electrician and an air conditioning/refrigeration technician. In retirement he spent nearly two decades collecting photos and history of Fox Point, the neighborhood he grew up in and loved. This passion developed into the Fox Point Photo History Project with the contributions of many Fox Pointers, Brown University's Center for Public Humanities, the Providence Public Library, and others. His wish was that the photos would be accessible to everyone, and many are now permanently available at the Lou Costa Collection in the Providence Public Library's Special Collections as well as online at the Fox Point Photo History Project: https://www.flickr.com/photos/foxpoint/. Relatives and friends are invited to attend the visitation hour which will be held on Thursday, February 25, 2021 from 9 a.m. to 10 a.m. in Our Lady of the Rosary Church, 21 Traverse St., Providence, and the Mass of Christian Burial to follow at 10 a.m. Seating will be limited; face coverings and social distancing must be observed. Due to gathering restrictions burial with Military Honors at Veteran's Memorial Cemetery will be private. In lieu of flowers, donations in his memory may be made to a veterans organization or the Providence Public Library (to support the "Lou Costa Collection") 150 Empire St., Providence, RI 02903: https://www.provlib.org/support-us/make-a-donation-to-ppl/.

Louis Costa (84) went home to God on Saturday, February 20, 2021, after a long fought battle with cancer. He was the son of the late Antonio and Maria de Lourdes (Raposo-Silva) Costa. He is survived by his wife Judith (Soares) Costa and his... View Obituary & Service Information

The family of Louis Costa created this Life Tributes page to make it easy to share your memories.

Send flowers to the Costa family.