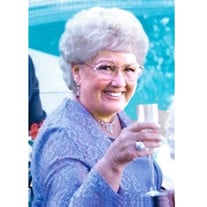 Born in Providence, RI Resided in Providence, Johnston, RI and West Palm Beach, Florida Loretta DeBerardis, 90, passed away peacefully on Thursday, February 6, 2020 surrounded by her loving family.  Loretta was one of five children born to the late Michael and Mary D´Ambra of Johnston, RI. She was married to her beloved late husband Henry (Ricky) DeBerardis for almost 70 years.  Loretta was the loving sister of the late, Gabriel D´Ambra, Michael D´Ambra, Anna DeLuise and Josephine Nyzio. Loretta had a passion for knitting and crocheting. Loretta was a devoted mother to her three children and loved spending time with her beautiful grandchildren and great-grandchildren.  She was a humble, kind and compassionate friend to everyone she met. Loretta will be lovingly missed by her three children, Cheryl DeBerardis Marandola of West Warwick, Henry and (Susan) DeBerardis, Jr. of North Kingstown, and Kenneth and (Nancy) DeBerardis of Scituate, RI. She was so admired by her 8 grandchildren, Eddy III and Marc (Joyce) Marandola, Erica, Christopher (Amanda), Haley and Sophie DeBerardis, Alexandra (Anthony) Chiero, and Joseph DeBerardis.  She was the great-grandmother to Marc, Jr. and Capri Marandola, Isabella DeBerardis, Serafina and Natalia Chiero. Loretta is also survived by her many wonderful nieces and nephews. All are invited to a Mass of Christian Burial to be held at Our Lady of Grace Church, George Waterman Road, Johnston, RI on Friday, February 14 at 10:00 a.m.  Loretta will be laid to rest in a private service at St. Ann´s Cemetery in Cranston. Visitation is respectfully omitted. The family asks that in lieu of flowers, donations be made to the Brain Injury Association of RI, 1017 Waterman Avenue, East Providence, RI 02914.

Born in Providence, RI Resided in Providence, Johnston, RI and West Palm Beach, Florida Loretta DeBerardis, 90, passed away peacefully on Thursday, February 6, 2020 surrounded by her loving family.  Loretta was one of five children born to the... View Obituary & Service Information

The family of Loretta M. DeBerardis created this Life Tributes page to make it easy to share your memories.

Send flowers to the DeBerardis family.