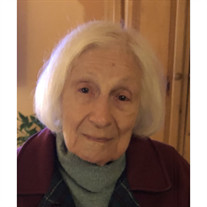 Donnelly, Livia S. (DeQuattro) 103, of Providence passed away peacefully after a short illness on Wednesday, December 15, at the HopeHealth Hulitar Hospice Center in Providence surrounded by her loving family. Livia was born in Providence, RI, in 1918 and she was the beloved wife of the late Edward V. Donnelly. She was the daughter of the late Fabiano and Grazia (Patrone) DeQuattro and sister of the late Armando DeQuattro and Ida (DeQuattro) Agostinelli. She is survived by her two daughters, Vanessa G. Del Giudice and her husband Dante, and Linda S. Duguay and her husband Richard, and her grandchildren, Ian Del Giudice, Leah Del Giudice, Aaron Gel Giudice and Elisa Duguay. Livia was a graduate of Central High School and she worked at the Gladding's department store in Providence before her marriage in 1949. She was a dedicated wife, mother, grandmother, and homemaker who always welcomed family to her home and who loved to be surrounded by her grandchildren. Livia loved to read and travel, took a keen interest in current affairs, enjoyed annual vacations with family, and travelled with her daughters and granddaughters to Italy in 2012. Relatives and friends are invited to calling hours on Sunday, December 19 from 3:00-6:00 pm at the Maceroni Funeral Home, 1381 Smith St, North Providence, RI. The funeral service and burial will be private. Our family would like to thank the staff of the HopeHealth Hulitar Hospice Center in Providence for the care and compassion they gave to Livia. In lieu of flowers, donations in her memory to the HopeHealth Hulitar Hospice Center, 1085 North Main St, Providence, RI 02904 will be appreciated.

Donnelly, Livia S. (DeQuattro) 103, of Providence passed away peacefully after a short illness on Wednesday, December 15, at the HopeHealth Hulitar Hospice Center in Providence surrounded by her loving family. Livia was born in Providence,... View Obituary & Service Information

The family of Livia S. Donnelly created this Life Tributes page to make it easy to share your memories.

Send flowers to the Donnelly family.