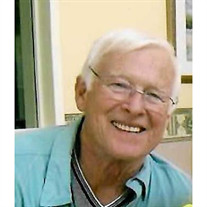 Kenneth J. O'Grady, 79, a resident of North Providence since 1985, died Thursday December 2, 2021 at Miriam Hospital in Providence, surrounded by his loving family. His quiet dignity, wisdom and strength were an inspiration to all who knew him, and he touched the lives of many with his integrity, kindness and grace. Ken was the beloved husband of Marion E. (Lapati) O'Grady, and the couple recently celebrated their 55th wedding anniversary on November 11. He was born in Pawtucket, the son of the late Daniel M. and Catherine E. (Jurczyk) O'Grady and was the brother of Daniel O'Grady (wife Lizabeth). His greatest love and joy were his family: his wife Marion and his daughters Kristen O'Grady and Lisa A. Manning. His later years were filled with pride and delight for his grandchildren: Hailey Manning and James and Ruby Ciummo, and he could be found cheering at every event, recital, and sports game. He was also proud to be the paternal mentor of Jonathan Mailhot (US Army) and the father-in-law to Bruce Ciummo and the late Richard Manning. Ken served as an Educator, Administrator and Principal in the North Kingstown School System for many years, retiring as Principal of the Wickford Elementary School. In his retirement, he especially enjoyed working as a bus driver for special education schoolchildren in the Providence school system and serving on the board of the Whitmarsh House, a group home for youth. He traveled to Haiti on a service mission to aid the needs of the poor, and later served on the Board of Directors of Providence Haiti Outreach. He was instrumental in building the St. Dominque School, which opened its doors with 50 children and now educates more than 700. An Eagle Scout, Ken graduated from Our Lady of Providence Seminary and attended Saint Bernard Seminary in Rochester, NY. He received his master's degree in education from Providence College. A devout Catholic, Ken was a member of St. Patrick Parish in Providence, The People of God's Love and the Men of Saint Joseph. A Mass of Christian Burial will be offered Tuesday, December 7, 2021 at 10:00am in St. Patrick Church, located at 244 Smith Street, Providence. Interment will follow in Saint Ann Cemetery, Cranston. Relatives and friends are invited to attend. Calling hours are Monday from 5:00-7:00pm in The MACERONI FUNERAL HOME, 1381 Smith Street, North Providence. In lieu of flowers, donations in his memory may be made to Providence Haiti Outreach.org, (125 Scituate Avenue, Cranston, RI 02921) or Right to Life Services Inc., (266 Smith Street, Providence, RI, 02908).

Kenneth J. O'Grady, 79, a resident of North Providence since 1985, died Thursday December 2, 2021 at Miriam Hospital in Providence, surrounded by his loving family. His quiet dignity, wisdom and strength were an inspiration to all who knew him,... View Obituary & Service Information

The family of Kenneth J. O'Grady created this Life Tributes page to make it easy to share your memories.

Send flowers to the O'Grady family.