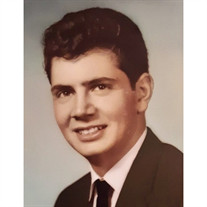 Joseph A. De Santis Sr., 77, of West Kingston, passed away peacefully at home on Wednesday, April 29, 2020 with his loving family by his side. He was the beloved husband of Frances M. (Gilbert) De Santis for 55 years. Born in Providence, he was the son of the late Armando and Mary (Lisa) De Santis. Mr. De Santis was an industrial radiographer for Anvil International for many years before retiring. He was a graduate of Mount Pleasant High School and the St. Joseph School of Radiology.  He was the President of Hillsdale Association, past member of Narragansett Lion's Association.  Avid bowler and golfer in his younger years.  Built his own boat and loved spending time with family on the water and at Allens Harbor.  Mr. De Santis was a movie lover, cigar smoker, snail salad/ shrimp and lobster sauce eater, Patriot lover and an all- around great guy.  He loved his family and friends though may not have always told them.  Family First, Family Always. In addition to his wife he is survived by his three children, Joseph A. De Santis,Jr. and his wife Sherry of Pelham, AL.  Julienne Kelly and her husband Michael of Narragansett, RI and Jerilyn Fleck of Durham, CT; his brother, Paul A. DeSantis of North Providence, RI; his sister, Madelyn Germani of Johnston, RI;  He was Papa/Poppy to his six grandsons: Nicolas and Stuart De Santis, Travis and Kyle Kelly, Bryce and Drue Fleck.  He is also survived by his sister-in-law, Sue Ann Burgess; two nephews, Christopher and Shawn Robinson; and many cousins.  He was the brother-in-law of the late Ronald Germani and father-in-law of the late Darren Fleck.  In lieu of flowers, please consider donating to Narragansett Pier Plays: checks made to NPMS PTO in memory of Joseph De Santis in the memo. Can be mailed to Julienne Kelly, PTO Treasurer, 22 Bow Run, Saunderstown, RI 02874 and South County Health Cancer Center. Consistent with precautions due to the Coronavirus, a Catholic mass will be held at St. John & Paul Church 341 S Main St, Coventry, RI at a later day with a Celebration of Life.

Joseph A. De Santis Sr., 77, of West Kingston, passed away peacefully at home on Wednesday, April 29, 2020 with his loving family by his side. He was the beloved husband of Frances M. (Gilbert) De Santis for 55 years. Born in Providence, he... View Obituary & Service Information

The family of Joseph A. De Santis created this Life Tributes page to make it easy to share your memories.