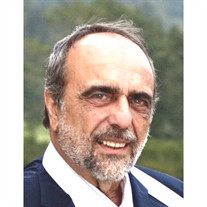 John William Ranucci passed away peacefully on July 15, 2020 in the company of family and friends. The son of Joseph Ranucci and Andrianna "Anna" Ranucci (née Imonti), he was born and raised in Providence, Rhode Island. He graduated from Mount Pleasant High School in 1964 and then studied biology and mathematics at the University of Rhode Island, graduating in 1968 with distinction and as a member of the Phi Kappa Phi honor society. Shortly after starting a career in teaching and the birth of his first child, he served in combat in Vietnam between 1968 and 1970, where he received multiple medals, including the Bronze Star. In the early 1970's, he and a friend started one of the first local neighborhood bike shops, A.J. Spokes, which was located on Hope Street on Providence's East Side. Always looking for a new challenge, John changed paths and attended University of Connecticut School of Law, where he served on the law review.  After graduation, John returned to Providence and practiced law in Rhode Island and Massachusetts until his retirement. John is remembered as a man with a brilliant and analytical mind, who was full of intellectual curiosity. Although he chose to practice law, it was math, science and engineering that motivated him. He pursued those interests through his many hobbies including, restoring vintage German cars. He was a self-taught mechanic and he became a neighborhood fixture in Federal Hill working on his cars into the late hours of the night. John found peace passing at his home in Federal Hill. He is survived by his children, Leighlan Ranucci and John Ranucci; daughter-in-law, Lauri Reitzammer; grandson, Lucas Ranucci; brother, Joseph Ranucci and sister-in-law, Carolyn Ranucci. A private memorial gathering to celebrate John's life will be announced in the near future.

John William Ranucci passed away peacefully on July 15, 2020 in the company of family and friends. The son of Joseph Ranucci and Andrianna "Anna" Ranucci (née Imonti), he was born and raised in Providence, Rhode Island. He graduated from Mount... View Obituary & Service Information

The family of John W. Ranucci created this Life Tributes page to make it easy to share your memories.

Send flowers to the Ranucci family.