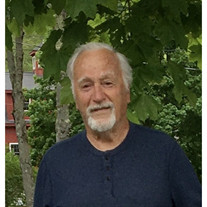 Howard E. "Howie" Horton, 85, of Pascoag, passed away peacefully on Sunday, September 27, 2020, at Bayberry Commons. Born in Providence, he was the son of the late Howard P. Horton and Irene Smith. Howie worked for American Chemical Works as a truck driver for many years before retiring. He was a member of Teamsters Local 251 and a Marine Corps Veteran of the Korean War. He is survived by his daughter, Cynthia Greene and her husband, Daniel; a brother, Robert Horton and his wife Carole-Lee; his granddaughter, April Schiffmann and her husband, Armin; and two great grandchildren, Bailey and Riley. Howie is also survived by his longtime companion, Sally Taylor; her daughter, Jill Royer and her husband, Matthew and their son, Eamon. He was the father of the late Howard Horton Jr. and brother of the late Barbara Gardner, Phyllis Eagleson and Lois Briggs. Howie loved a good joke and took every opportunity to be a prankster - didn't matter whether you were family, friend, or foe! He enjoyed camping, playing pool, planting and growing his vegetable garden, and letting everyone know he was a proud Marine. His passion, though, was riding his Harley-Davidson. He rode his bike every chance he got through the back roads of RI and CT ... and he made many life-long friends as he rode. Visitation will be held Saturday, October 3, 2020, from 4 - 7 p.m. in the Maceroni Funeral Home, 1381 Smith St., North Providence. Howie's burial with Military Honors will be held at a later date when it is safe for family and friends to gather as a larger group. Donations in his 'memory may be made to: Wounded Warrior Project, PO Box 75816, Topeka, Kansas 66675-8516.

Howard E. "Howie" Horton, 85, of Pascoag, passed away peacefully on Sunday, September 27, 2020, at Bayberry Commons. Born in Providence, he was the son of the late Howard P. Horton and Irene Smith. Howie worked for American Chemical Works as... View Obituary & Service Information

The family of Howard E. Horton created this Life Tributes page to make it easy to share your memories.

Send flowers to the Horton family.