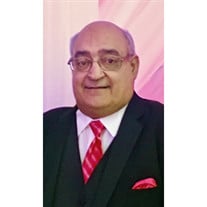 George P. Andrews, Sr., 75, of Johnston, passed away at home on Monday, May 17, 2021. Born in Providence, and a long-time resident of Johnston, he was married to the love of his life, the late Patricia M. (Ritter) for over 51 years, and the son of the late Arthur and Josephine (Petrucci) Andrews. George is also survived by his three children, Nicole Andrews of East Greenwich, Christina Andrade and her husband, Anthony of Killingly, CT and George P. Andrews, Jr. of Lincoln. He adored his four granddaughters, Alexia Furia, Ella Raczelowski, and Olivia and Abigail Andrade and cherished their visits and phone calls. In addition, George also leaves behind a sister Paula Silva formally from Johnston, and brothers Bill of Providence and Lenny of Cranston. Anyone who knew George "The Greek" knew of his passion for Drum & Bugle Corps. He started as a teen playing snare drum for the Bristol Kingsmen in 1960, moving onto the Marksmen, and eventually the RI Matadors and was inducted into the World Drum Corps Hall of Fame in 2002. George's passion for drums did not end there and he volunteered his time teaching his "kids" at Case High School throughout the 80's and early 90's. Not a day would go by, even in these later years, where he wasn't watching a more recent competition and stating how Drum Corps had changed; it was nothing like it was "back then". It truly was his passion. Besides drum corps, George loved to be with his wife Patty. They loved to dine out and go to the casino with their many friends and family members. A member of Teamsters Local 251, George worked for Almacs prior to their closure, and later moved into sales and marketing. George always worked hard to ensure his Patty had everything she needed to raise his three children and provided them with everything they needed and more. His wife and children meant everything to him, and he was his happiest when surrounded by the fun and laughter of everyone, especially during the holiday season. Visitation will be held on Friday, May 21, 2021 from 4 p.m. to 6:30 p.m. followed by a Celebration of George's Life at 6:30 p.m. in the Maceroni Funeral Home, 1381 Smith St., North Providence. In lieu of flowers, donations in his memory may be made to the Gloria Gemma Breast Cancer Resource Foundation, 249 Roosevelt Ave. Suite 201, Pawtucket, RI 02860. https://www.gloriagemma.org/

George P. Andrews, Sr., 75, of Johnston, passed away at home on Monday, May 17, 2021. Born in Providence, and a long-time resident of Johnston, he was married to the love of his life, the late Patricia M. (Ritter) for over 51 years, and the... View Obituary & Service Information

The family of George P. Andrews created this Life Tributes page to make it easy to share your memories.

Send flowers to the Andrews family.