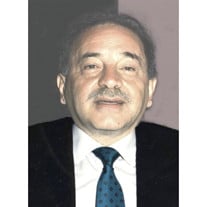 On Saturday June 8, 2019, Frank Mario D'Alessandro, MD, passed away at the age of 85.  He was the beloved husband of Marta (Mimmi) D'Alessandro for 59 years.   Dr. D'Alessandro was born on October 7, 1933, in Providence, RI. He was the son of the late Frank and Maria (Clavio) D'Alessandro. Dr. D'Alessandro was a 1951 graduate of LaSalle Academy, a 1955 graduate of Providence College and received his medical degree from the University of Bologna in 1960.  He began an internship at St. Joseph Hospital in 1960 and continued his training in Internal Medicine and Endocrinology at Carney Hospital and Lahey Clinic in Boston. He returned to Providence and opened a medical practice in 1964.  He practiced medicine in North Providence, RI for more than 50 years, his final years together with his son Dr. Frank B. D'Alessandro.  He is survived by his wife, Marta and four children, Frank B. D'Alessandro, MD and his wife Michelle, Debora D'Alessandro, Esq. and her husband, Edward Medici, Esq., Natalie D'Alessandro Volpe, MBA and her husband John Volpe, DPM and Jules J. D'Alessandro, Esq. and his wife, Amy D'Alessandro, Esq.  He was the proud grandfather of Alexandra Volpe, Jonathan Volpe, Domenic Caniglia, Antonio D'Alessandro, Ariana D'Alessandro, Justin D'Alessandro, Giavanna D'Alessandro and Jaeson D'Alessandro. Dr. D'Alessandro a/k/a "Doc from North Providence" as he was known on the radio show of his lifelong friend Vincent "Buddy " Cianci, was a popular guest on the show regularly giving his opinions and dispensing his advice to the show's listeners. Dr. D'Alessandro was the recipient of numerous awards for his dedication, commitment, compassionate contributions and humanitarian efforts to the community.  Awards included the DaVinci Center Community Humanitarian Award in 2002.  He was invested by the Order of Malta as a Knight of Magistral Grace on November 12, 2004. A member of the military, United States Army, in 1967, Dr. D'Alessandro was drafted into the Vietnam War.  He served stateside at military hospitals in Texas, Missouri, West Point Military Academy, New York and Fort Devens. Having served as a Captain and Major, he was honorably discharged in 1969.  Dr. D'Alessandro had a passion for learning and was a tireless advocate of the Italian heritage.  He was a Christopher Columbus scholar and served as chairman of the Christopher Columbus 500 Commission in 1991 and 1992.  He was also recognized for his distinguished achievement by the Justinian Law Society.  He had a long association with NIAF in Washington, DC, who have published many of his articles and letters and frequently sought his counsel on matters of discrimination of Italian Americans, as did the OSIA (Organization of the Sons of Italy of America) of New York. Dr. D'Alessandro was a published author of three books, Firemark, Sacco and Vanzetti: The Verdict of History and the Cassiopeia Grail.  A world traveler with his wife Marta visiting, Europe, Australia, South America, the Caribbean and the mid-east. During the mid-1960's, he spearheaded a local effort for the victims of the flood in Florence, Italy and managed to collect thousands of dollars in clothes and money. This effort continued for earthquake victims in Friuli and Naples. Dr. D'Alessandro lobbied local hospitals and pharmaceutical companies for medical supplies, which were sent to Tanzania Hospital in Dar-Es Salaam, Pediatric AIDS Relief in Kenya and locally to the Seaman's Institute and Travelers Aid. Dr. D'Alessandro's visiting hours will be held on Friday, June 14, 2019 from 4-7 p.m. at MACERONI FUNERAL HOME, 1381 Smith St., North Providence. Relatives and friends are invited to attend a Mass of Christian Burial on Saturday at 10 a.m. in St. Augustine Church, 639 Mt. Pleasant Ave., Providence.  Burial will be private. In lieu of flowers, donations in his memory may be made to: Alzheimer's Association Rhode Island Chapter, 245 Waterman St. #306, Providence, RI  02906.

The family of Frank M. D'Alessandro created this Life Tributes page to make it easy to share your memories.

Send flowers to the D'Alessandro family.