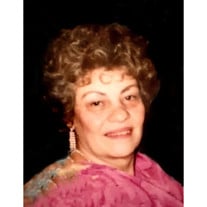 Flora A. (Porreca) De Luca, 89, of Providence, passed away at home on Tuesday, June 16, 2020 surrounded by her loving family. She was the wife of the late Francesco De Luca. Born in Cervinara, Avellino, Italy, she was the daughter of the late Onofrio and Pasqualina (Silvestri) Porreca. Flora first came to the United States on January 24, 1951, crossing the Atlantic on the ocean liner, Independence, and settling in Providence. She returned to Italy in April of 1954 on the Volcania, intending never to return. Duty called and she returned to Providence in November to be the godmother of her nephew, David. She again returned to her beloved Cervinara for her mother's funeral in 1958. She departed on a four propeller air plane on June 24, 1958 on an 18 hour flight. She again vowed never to return but then met the love of her life and husband of 50 years. Flora returned to Providence on May 18, 1960 on the Leonardo Da Vinci, this time staying to raise her loving family.  Flora brought generations of family into her home and around her table. She was the matriarch who kept everyone fed and everyone in line. She loved her garden, where she grew bushels of vegetables to feed her family and whoever else she could force to sit and eat. She enjoyed cooking for her family until her last days. She prepared a multi-course dinner every day, whether visitors were expected or not. If you missed a dinner, you would soon receive a voicemail to remind you that you still had a mother, you know. She so enjoyed teaching her daughter and daughters in-law her many recipes and spending countless hours around her kitchen table. Not only was she a wonderful cook but she made the best, award winning, limoncello this side of Amalfi. A loving and devoted mother and Nonna, she is survived by two sons, Michael R. De Luca and his wife, Janet and Luca De Luca and his wife Lori; a daughter, Ramona Di Palma and her husband, Paul; two brothers, Luigi and Bruno Porreca; a sister, Lucia L'Europa; and six grandchildren, Francesco De Luca and his wife Allison, Paolo and Michaela De Luca, Nicholas, Chiara and Johnny Di Palma.  She was the sister of the late Carmine, Agostino and Fioravante Porreca, Rita Iannuccillo, Concetta Zugg, Maria Zugg and Italia Fiano.  Due to Covid-19 restrictions, Mrs. De Luca's funeral and burial will be private.  A private funeral mass for immediate family only will be celebrated at Holy Ghost Church on Saturday, June 20, 2020 at 10:00 a.m. with a burial immediately following at St. Ann's Cemetary, Cranston. In lieu of flowers, donations in her memory may be made to Holy Ghost Church, Providence.

Flora A. (Porreca) De Luca, 89, of Providence, passed away at home on Tuesday, June 16, 2020 surrounded by her loving family. She was the wife of the late Francesco De Luca. Born in Cervinara, Avellino, Italy, she was the daughter of the late... View Obituary & Service Information

The family of Flora A. De Luca created this Life Tributes page to make it easy to share your memories.