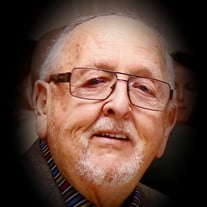 Eugene Carlino, 86 of Palm Beach Gardens, Florida, passed away peacefully on April 1, 2022. Gene, as his friends called him, was surrounded by his children, grandchildren and son and daughters in laws and his loving companion Linda. Caring for his family including his mother and brothers and sister was extremely important to him. If you knew Gene well, you know he always appreciated a good prank, so his family expected him to open his eyes and say, "April Fools." He was an avid animal lover his entire life with family pets including a monkey, a donkey, birds that would fly freely in his home, several dogs including his late beloved Sophia, an Italian grey hound, and exotic fish. He had a passion about precious metals establishing a business in the 60s' known as Coin-O-Rama. His recreational hobbies included golfing and playing knock gin. If you were his gin partner and didn't play your hand to win the "box" you could expect at a minimum a glare from his piercing blue eyes and at worst a serious verbal reprimand. Professionally, like his own father he was a home builder, however by most accounts he preferred the business end of things rather than the labor end of things. As a sign of his ingenuity, he established a retail lumber yard with business partners George and the late Bob Pesce. Gene's idea initially was to purchase lumber at wholesale to build homes. Under his son Steven's guidance, the lumber business has grown to be one of the largest independent retail lumber companies in Rhode Island, which Gene took great pride in. His children Diane, Steven and Gene, seven grandchildren and great granddaughter and all their spouses will miss him dearly and carry him with them. His funeral service will be held Wednesday, April 6, 2022, at 11:30 AM from the Maceroni Funeral Home, 1381 Smith St., North Providence, followed by a Mass of Christian Burial at 12:30 PM in St. Anthony Church, 1413 Mineral Spring Ave, North Providence. Burial will be in St. Ann Cemetery, Cranston. Visiting hours are Tuesday from 4-8 PM. St. Anthony Church mattered greatly to Gene. In lieu of flowers, donations to St. Anthony Church, 5 Gibbs Street, North Providence, RI 02904, are greatly appreciated.

Eugene Carlino, 86 of Palm Beach Gardens, Florida, passed away peacefully on April 1, 2022. Gene, as his friends called him, was surrounded by his children, grandchildren and son and daughters in laws and his loving companion Linda. Caring for... View Obituary & Service Information

The family of Eugene Carlino created this Life Tributes page to make it easy to share your memories.

Customized sympathy cards. Mailed for you.