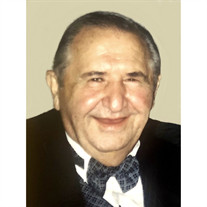 Ernesto Folcarelli, 99, a longtime resident of North Providence, passed away peacefully Thursday, January 21, 2021 at the Rhode Island Veterans Home in Bristol. He was the beloved husband of the late Concetta "Connie" (DiOrio) Folcarelli. Born in Providence, he was the son of the late Luigi and Carmella (Pegna) Folcarelli. Ernie entered the army in 1943 and served as a Staff Sergeant in the 75th Division, Company F 289th Infantry during WWII as a machine gunner. He fought in the Battle of the Bulge and was a Bronze Star Medal recipient among other commendations. His official records stated that "during that period of the campaigns through Belgium, France, Holland and Germany, Squad Leader Folcarelli rallied great efforts from his men despite adverse weather conditions and his highly efficient manner of performance under heavy enemy fire inspired his fellow soldiers." After the war he returned to his trade. Ernie married his sweetheart in 1952 and settled in Providence where he co-founded Kenyon Tool in 1969. He was also Past President of the Italo American Club. He is survived by his son, Ernest A. Folcarelli and his wife Suzanne, of Smithfield; his daughter, Janet Izzo and her husband Mario, of Narragansett; two grandchildren, Ernest W. Folcarelli and his wife Stefanie, of Long Island, NY and Christina DiCesare and her husband Andrew of Frisco, TX and two great-grandchildren, Sofia DiCesare and Archer Folcarelli. He was the brother of the late Americo, Armando, Rocco, Edith and Marie Folcarelli and Helen Martin. The family would like to extend their deepest appreciation to the Healthcare professionals and staff in the Alpha Neighborhood of the RI Veterans Home. Their compassion and care for the past two years has been nothing but the best! And thank you to the staff in the Foxtrot Neighborhood as well who cared for Ernie during the last two weeks of his life. His funeral and burial will be private. In lieu of flowers, we ask that you contribute to a charity of your choice in Ernie's memory.

The family of Ernesto Folcarelli created this Life Tributes page to make it easy to share your memories.

Send flowers to the Folcarelli family.