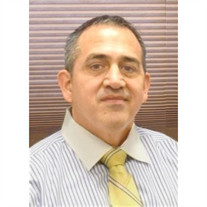 Dr. Edward V. Chavez, 55, of Cumberland, went home to the Lord on Tuesday, August 10, 2021. He leaves his faithful partner in parenting, Dr. Gina La Prova. Born in Bryan, OH, he was the son of Theresa DeLeon and the late Hubert Chavez. Dr. Chavez is also survived by his sons, Leonardo Chavez and Massimo Chavez; his brothers, Michael and his wife Brenda, Joey and Johnny Chavez, and his sister, Angela Skalla and her husband Shane. He was the brother of the late Steven Chavez. Dr. Chavez was the sole proprietor of Peak Performance Chiropractic Inc. in Boston, MA for the past 20 years where he practiced as a chiropractor specializing in athletes and overall wellness. He was loved by his patients and always took the time to engage in conversation with everyone. He was known for being down to earth, friendly enjoying joking around to create laughter among others. Dr. Chavez was an experienced athlete and, in his youth, competed in football, baseball, and wrestling. He later pursued his passion for athletic achievement at Eastern Michigan University where he attended on a wrestling scholarship. After graduation, he applied his physical prowess and developed mind to the service of his country with the United States Marine Corps. Dr. Chavez's greatest achievement were his two boys in which he instilled at a very young age a love of sports. Dr. Chavez adored and was completely enamored with his precious boys. Dr. Chavez loved coaching his son's sports teams and recently coached his son's All Star Baseball team. He dedicated his life to driving them all over New England to sporting events as his weekends were dedicated to being "Daddy Uber" loving every minute of it. He took the utmost pleasure and was privileged to spend every free moment engaging his boys in sports. He was an avid athlete and competed in numerous marathons throughout the country and ran the Boston Marathon in 2011. He stopped running marathons to dedicate his life to his children. He will be deeply missed beyond words. Visiting hours will be Saturday. August 21, 2021 from 8:30-10:30 AM at Maceroni Funeral Home, 1381 Smith St., North Providence. A Mass of Christian Burial will be celebrated at 11 AM in St. Augustine Church, 639 Mt. Pleasant Ave, Providence. Entombment will follow at St. Ann Cemetery, Cranston.

Dr. Edward V. Chavez, 55, of Cumberland, went home to the Lord on Tuesday, August 10, 2021. He leaves his faithful partner in parenting, Dr. Gina La Prova. Born in Bryan, OH, he was the son of Theresa DeLeon and the late Hubert Chavez. Dr.... View Obituary & Service Information

The family of Edward V. Chavez created this Life Tributes page to make it easy to share your memories.

Send flowers to the Chavez family.