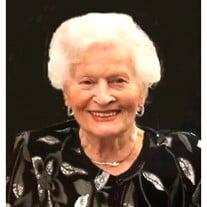 Dorothy M. Ruggerio, 95, passed away peacefully on Tuesday, December 17, 2019.  She was the loving wife of the late Mario "Charlie" Ruggerio and mother of the late Charles "Chucky" Ruggerio.  She was the daughter of the late Joseph and Mary (Margolis) Prush.  A loving and devoted mother, grandmother and great grandmother, she is survived by her son, Senator Dominick J. Ruggerio; her daughter, Lisa Aceto and her husband James; a sister, Joan Negris; five grandchildren, Charles Ruggerio, Christine DeSimone, Amanda Fallon, Justine Melo and Anthony Aceto; and five great grandchildren.  She was the sister of the late William, Joseph, Edward, Raymond, Stephen and John Prush, Eleanor O'Reilly and Agnes Kerr. Born in Jamaica (Queens), New York, Dorothy possessed a formidable and independent spirit.  She spent much of her younger life traveling while working as a dancer, helping to support her family.  She enjoyed an active social life, which included bowling, card playing and golfing with her many friends at Kirkbrae and Lousiquissett Country Clubs.  She was a talented seamstress and fabulous cook who enjoyed sharing her culinary talents with her family and friends and occasionally lending them to the kitchen staff at her family's restaurant, The Chalet.  Dorothy spent her final years as a resident at Elmhurst Rehabilitation and Nursing Center where she was loved by her fellow residents and caring staff. Relatives and friends are invited to attend a Mass of Christian Burial on Saturday, December 21, 2019 at 11 a.m. at St. Anthony Church, 1413 Mineral Spring Ave., North Providence. Visitation is respectfully omitted, and burial will be private.  Donations in Mrs. Ruggerio's memory may be made to: Hope Hospice and Palliative Care, 1085 North Main St., Providence, RI  02904.

The family of Dorothy M. Ruggerio created this Life Tributes page to make it easy to share your memories.

Send flowers to the Ruggerio family.