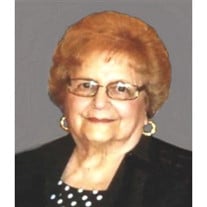 Dolores C. DeAngelis, 89, of Smithfield, was called into eternal life peacefully surrounded by her devoted and loving family on Wednesday, July 3, 2019.  Born May 14, 1930 in Providence, Dolores was the daughter of the late Paul and Vera (Calenda) Martellini.  She was greeted by her loving husband Paul DeAngelis, Jr. into the gates of heaven. Dolores took most pride in her role as mother, grandmother, sister, aunt and friend.  She was adored by many, and had the ability to touch every life she encountered.  She demonstrated the importance of Sunday dinner into all her children and grandchildren by passing along her passion to cook and be surrounded by the people we love, right alongside with the food we love.  She also excelled in her job as floral designer at the Calart Tower for over 45 years. Dolores, who was more commonly known as "Chubby," demonstrated a life of simplicity and bliss.  She was a gentle woman, who gave quietly and generously of herself. She will live on through her family forever more, and her legacy will be carried on through cooking, never forgetting a birthday, and unconditional love she instilled within her family. Dolores leaves behind her three children, Paul DeAngelis and his wife Joan, Donna Rampone and her husband Hon. William Rampone and Rhonda Mullen.  She was the devoted and admired grandmother of Matthew and his wife Bridget, Michael, Joseph, Alicia and her husband Richard, Elizabeth and Olivia. She also leaves her three great grandchildren, Fiona, Reid and Thomas.  In addition, she leaves behind her sister, Marie Manfredo, along with many adored nieces and nephews.  She was the mother-in-law of the late Joseph Mullen and sister of the late Verna Sammartino and Micahel Martellini. Her funeral will be held Thursday, July 11, 2019 at 9 a.m. from MACERONI FUNERAL HOME, 1381 Smith St., North Providence, followed by a Mass of Christian Burial at 10 a.m. in St. Pius V Church, Eaton St., Providence. Burial will be in St. Ann Cemetery, Cranston. Visitation Wednesday 4 - 7 p.m.  Donations in Dolores' memory may be made to: Hope Hospice & Palliative Care, 1085 North Main St., Providence, RI  02904.

Dolores C. DeAngelis, 89, of Smithfield, was called into eternal life peacefully surrounded by her devoted and loving family on Wednesday, July 3, 2019.  Born May 14, 1930 in Providence, Dolores was the daughter of the late Paul and Vera (Calenda)... View Obituary & Service Information

The family of Dolores C. DeAngelis created this Life Tributes page to make it easy to share your memories.

Dolores C. DeAngelis, 89, of Smithfield, was called into eternal...

Send flowers to the DeAngelis family.