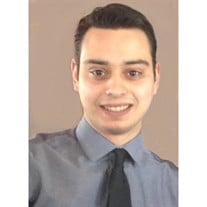 Christian J. Salvadore, 28, of Lincoln, passed away unexpectedly on Saturday, October 23, 2021. Born in Providence, he was the beloved son of Joseph C. Salvadore, Esquire and Maria (Loureiro) Salvadore of Lincoln. Besides his parents, Christian is survived by his sisters, Jessica Maria Salvadore and Jennifer Taylor Salvadore, both of New York City, as well as many loving relatives, friends and co-workers. He was the grandson of the late Joseph O. Salvadore, Ann G. Salvadore, Manuel de Loureiro and Maria Loureiro. Christian was a member of the Laborer's International Union of North America, Local 271, and employed at Manafort Transit/Manafort Brothers, the Dunkin Donuts Center, and the Rhode Island Convention Center. He was also a real estate investor and multi-family property owner. Christian grew up in North Providence and Parkland, Florida. He last attended Marjory Stoneman Douglas High School in Parkland, Florida. In his youth, he participated in the Rhode Island Young Marines and competitive athletics. He attended summer camps at The Citadel, The Military College of South Carolina, Charleston, South Carolina. Christian was a dedicated and hard worker, a good and loyal son and brother, and he cared deeply about others and his fellow Local 271 co-workers. Christian's funeral was held on Friday, October 29, 2021 at 9 AM from the Maceroni Funeral Home, 1381 Smith St., North Providence, followed by a Mass of Christian Burial at 10 AM in the Cathedral of Saints Peter and Paul, 30 Fenner St., Providence. Burial took place in St. Ann Cemetery, Cranston. Visiting hours were Thursday, October 28, 2021 from 5-8 PM. In lieu of flowers, donations may be made in Christian's memory to the Rhode Island SPCA, 186 Amaral St., Riverside, RI 02915.

Christian J. Salvadore, 28, of Lincoln, passed away unexpectedly on Saturday, October 23, 2021. Born in Providence, he was the beloved son of Joseph C. Salvadore, Esquire and Maria (Loureiro) Salvadore of Lincoln. Besides his parents, Christian... View Obituary & Service Information

The family of Christian J. Salvadore created this Life Tributes page to make it easy to share your memories.

Send flowers to the Salvadore family.