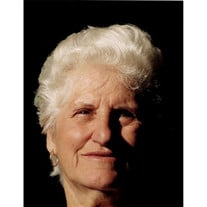 Catherine M. Cabana (Giannini), 97, of North Providence, passed away Saturday, July 27, 2019 at Golden Crest Nursing Center. She was the wife of the late Raymond A. Cabana, to whom she was married for 48 years. Born in Pawtucket, she was the daughter of the late William and Carmina (Morelli) Giannini. Catherine, known to her friends as Kay, was a graduate of Saint Joseph School and East High School in Pawtucket.  She was active in competitive athletics excelling in basketball and track and field. She was an avid figure skater and bowler. She began her working career as a machine operator at Collyer Insulated Wire during the war years, later moving to Royal Electric.  She retired in 1990 from R. N. Koch Inc. jewelry manufacturers after 25 years of service. Kay volunteered with a variety of charitable organizations.  She served as a member and officer of the Holy Rosary Society of St. Joseph's Church in Pawtucket.  She was active in the St Raphael Academy Ladies Auxiliary both as a member and officer. After retirement, Kay was involved in a number of activities at St. Augustine Church serving for over 20 years as a member of the Altar Guild. She was a member of Manton Seniors and an active participant in their senior bowling league. She is survived by her son, Michael Cabana and his wife Gail Husch. She was the sister of the late Joseph, Bernard, Charles and Paul Giannini, and her twin sister Rose Giannini. Because of Catherine's lifelong commitment to children in need the family requests that, in lieu of flowers, donations be made in Catherine's name to Children's Friend and Services, 153 Summer Street Providence RI, 02903, or Meeting Street School, 1000 Eddy Street, Providence RI. 02905. Visiting hours will be Friday, August 2, 2019 from 9-10AM at Maceroni Funeral Home, 1381 Smith St., North Providence, followed by a Mass of Christian Burial at 11AM in St. Augustine Church, 639 Mt. Pleasant Ave, Providence. Burial will be in Notre Dame Cemetery, Pawtucket.

Catherine M. Cabana (Giannini), 97, of North Providence, passed away Saturday, July 27, 2019 at Golden Crest Nursing Center. She was the wife of the late Raymond A. Cabana, to whom she was married for 48 years. Born in Pawtucket, she was the... View Obituary & Service Information

The family of Catherine M. Cabana created this Life Tributes page to make it easy to share your memories.

Send flowers to the Cabana family.