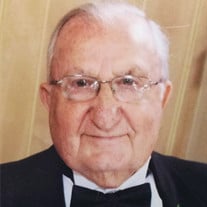 Carmino "Russ" D. Russo passed on to his eternal rest on January 20th with his loving daughters by his side. He was born on March 24,1928 to Giuseppe Russo and Angelina (Ricci) Russo of North Providence and resided there until his passing. He was the devoted husband of the late Domenica (Giarrusso) Russo for 67 years and the loving father of Lisa D. Russo and Carolyn A. (formerly Cozad) Russo. Besides his two daughters, he leaves behind one sister, Mary Cerbo and two brothers, Biago (wife Elaine) Russo and Anthony (wife Elaine) Russo, along with several nieces, nephews and godchildren. He was predeceased by his brothers Gene and Paul Russo and sisters Rose Zambarano, Pasqualina San Antonio and Lucy DiPierro. Carmino worked in the jewelry industry for 47 years, employed by Trifari, Krussman and Fishel. He retired as the Department Head of the Model Making division of the company after working in almost all areas of the business. He was a valuable, loyal and loved employee throughout his career. He served his country for 16 years in the Army National Guard, 103rd Howitzer Battalion, during the Korean War, and was honorably discharged with the rank of Master Sergeant. He was an active member and officer in the UCT (United Commercial Travelers) where he devoted much of his time. He was also a member of the North Providence Chapter of the AARP, the North Providence Senior Center, and a volunteer at St. Thomas Church. Carmino enjoyed playing golf, fishing and bowling and was a sports fan of football and baseball. He also was best known for his ability to "fix" things. He was a gentle man, with a patient, caring and loving spirit that radiated to all who knew him, and his greatest contributions always came from helping others. His funeral will be held Monday, January 31, 2022 at 9 AM from the Maceroni Funeral Home, 1381 Smith St, North Providence, followed by a Mass of Christian Burial at 10 AM in St. Thomas Church, 65 Fruit Hill Ave, Providence. Burial will be in St. Ann Cemetery, Cranston. Visiting hours are Sunday from 4-7 PM.

Carmino "Russ" D. Russo passed on to his eternal rest on January 20th with his loving daughters by his side. He was born on March 24,1928 to Giuseppe Russo and Angelina (Ricci) Russo of North Providence and resided there until his passing. He... View Obituary & Service Information

The family of Carmino D. Russo created this Life Tributes page to make it easy to share your memories.

Carmino &quot;Russ&quot; D. Russo passed on to his eternal rest on January...

Send flowers to the Russo family.