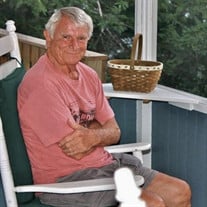 Carmine J. Vallese, 79, of Narragansett, passed away peacefully at home on Wednesday, October 14, 2020 surrounded by his loving family. He is survived by the love of his life, Barbara D'Amore Vallese. Born in Providence, he was the son of the late Joseph and Josephine (Sisto) Vallese. Carmine was a 1959 graduate of Mount Pleasant High School. He earned his bachelor's degree and then his master's degree at URI in 1965. He began his working career as a software engineer for Computer Devices International. During his 20-year tenure with the company, he was named Program Market Manager of the Year 5 times, 100% Club Winner 13 times and Summit Club Winner 2 times. Carmine continued his professional career as a professor of math, having taught at URI, CCRI and Johnson & Wales University. A decorated Army Veteran of the Vietnam War, Carmine served as Captain of the Army Corp where he was awarded the Bronze Star and Vietnam Service Medal. As a veteran himself, he committed to supporting many community service programs for veterans. Carmine was an accomplished athlete. He started playing Little League Baseball at a young age, high school baseball, basketball and wrestling, and continued playing baseball throughout college, where he won many awards. The culmination of his baseball career would come when he was asked to join the Cardinals. He was a member of the Elks Club and the Sons of Italy. In addition to his beloved wife of 24 years, he is survived by his daughter, Kate Ryan and her husband, Ken; a brother, Joseph Vallese and his wife, Doris; a sister, Jessica Hughes and her husband, Robert; his grandson, Sammy Ryan; and three stepdaughters, Lori Aquilante and her husband, Bill, Kelly Girard and her husband, Anthony and Leanne Johnson and her husband, Toby. Relatives and friends are invited to attend a Mass of Christian Burial on Monday October 19, 2020 at 10 a.m. in St. Augustine Church, 639 Mount Pleasant Ave., Providence. Burial with Military Honors will be in St. Ann Cemetery, Cranston. Donations in Carmine's memory may be made to the Wounded Warrior Project, PO Box 75816, Topeka, Kansas 66675-8516.

Carmine J. Vallese, 79, of Narragansett, passed away peacefully at home on Wednesday, October 14, 2020 surrounded by his loving family. He is survived by the love of his life, Barbara D'Amore Vallese. Born in Providence, he was the son of the... View Obituary & Service Information

The family of Carmine Vallese created this Life Tributes page to make it easy to share your memories.

Send flowers to the Vallese family.