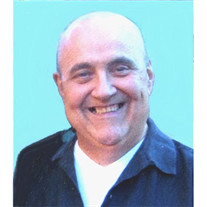 Carl Robert Ruggiero, of Cranston, passed away at the age of 77 at Roger Williams Medical Center on February 10, 2020.  Son of the late Carmine and Celia (Mastantuono) Ruggiero, Carl grew up in the heart of Federal Hill amidst hundreds of Italian families who ignited his lifelong love of the Italian language and culture.   Carl was a natural teacher and storyteller which turned into a fulfilling career.  He graduated from Classical High School and then went on to major in French/Education with a minor in English at Rhode Island College, graduating with honors in 1966. His very first job was teaching five classes of high school French at his alma mater, earning a solid reputation as a demanding, yet caring teacher of modern languages.  His love and pride for worldwide cultures, especially his Italian heritage, came through in the classroom.  Many of his students shared that Carl made learning a language both fun and stimulating.  Carl traveled to Italy many times, always bringing back knowledge to share with his students, friends, and family.  He pursued some graduate work in Italian to be certified and proceeded to teach for 31 years until his retirement in 1997. After retiring, Carl kept himself busy by continuing to teach part time.  He also acted in local plays and musicals, and he moved to Florida for 2 years to pursue a degree in culinary arts at the Art Institute of Ft. Lauderdale where he graduated with a 4.0 GPA.  This complemented his skill of knowing his way around any kitchen as his family always benefited from his love of cooking. From Sunday pasta dinners with family to his famous pizza, no one could replicate his perfected recipes. His favorite meals were macaroni (rigatoni) and meatballs in the Sunday "gravy" which he refused to call "sauce", turkey dinner, and pot roast.  Though he had many passions, nothing was more important to him than his family.  His greatest joy was his two nephews, Richard and David whom he loved more than life.  Add to that Richard's three boys, Ryan, Daniel, and Andrew who tripled his happiness. He loved celebrating holidays, special events, and any reason to spend time together.  He was also always the familiar face in the crowd at school activities for his three great nephews. Besides his nephews and great-nephews, he is survived by Richard's wife Lisa and David's wife Lauren. He was predeceased by his brother and sister-in-law, Richard Ruggiero and Janice Ruggiero. He leaves behind many cousins, friends, and loved ones.  Calling hours will be held on Saturday, February 15, 2020 from 8:30am-10:30am at the Maceroni Funeral Home at 1381 Smith St, North Providence, RI and immediately followed by a celebration of life at his final resting place, St. Ann Cemetery.

Carl Robert Ruggiero, of Cranston, passed away at the age of 77 at Roger Williams Medical Center on February 10, 2020.  Son of the late Carmine and Celia (Mastantuono) Ruggiero, Carl grew up in the heart of Federal Hill amidst hundreds of Italian... View Obituary & Service Information

The family of Carl R. Ruggiero created this Life Tributes page to make it easy to share your memories.

Carl Robert Ruggiero, of Cranston, passed away at the age of...

Send flowers to the Ruggiero family.