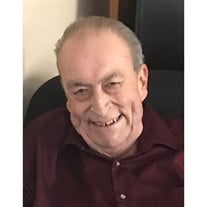 Bertrand B. Brousseau, 71, of North Providence, passed away Sunday, November 14, 2021 at Evergreen House Health Center in East Providence with his family by his side and in his heart. He was the beloved husband of the late Nancy (Milinec) Brousseau, with whom now he can sing and dance in the heavens. Born in Pawtucket, RI, he was the son of the late Ernest and Constance (Maurice) Brousseau. Bert grew up in Central Falls and attended Notre Dame Elementary School and Sacred Heart Academy. After graduating in 1968, Bert went on to Roger Williams University, where he earned his B.A. in Education. In the many years since, Bert had also received multiple master's degrees. In 1972, Bert began the first step of his lifelong teaching career, starting at Bishop Keough Regional High School. He quickly became the type of teacher who made learning enjoyable, and his students loved him. In 1975, Bert accepted a position at Central Falls Jr/Sr High School as a teacher with the Social Studies/History department. In 1995, Bert led 25 juniors, students in his U.S. History class, as they competed in the "We the People" competition on the Constitution and Bill of Rights. The students won the RI title, and went on to compete at the national level in Arlington, VA and Washington, DC. It was the trip of a lifetime for these students and Bert took great pride in their success. Bert also served as the Department Chair and finally Vice Principal at Central Falls Jr/Sr High School, until his retirement in 2005. Bert held an immense feeling of honor and loyalty regarding his long-standing career as an educator, but as a father and provider, he also worked other jobs, ensuring his family's needs were always met. He worked as a mutual clerk at Lincoln Greyhound Park for many years, also serving as their Union President, and also owned a modular home business. Bert was also the owner/operator and educator for the Fairlawn Summer School for over 20 years. Bert met Nancy in 1969 and they were both head over heels for each other. They married August 14, 1971 and danced to Chicago's "Color My World". Bert and Nancy colored their world by creating the life and loving family that they had both yearned for. Nancy passed away in 1994, but memories of her never faded from Bert's mind and heart. Bert wanted nothing more than to eventually be reunited with his forever love. His family takes comfort in knowing they are once again together in eternal life. Bert was a larger-than-life type of man. He was witty, sarcastic, and loved to make wise cracks (his children were also blessed with this trait). He believed that humor helped to keep everyday life enjoyable. Bert enjoyed his 15 minutes of fame: https://youtu.be/1yzCh6kVqhk. He was humble and virtuous- ensuring that he passed those prodigious qualities onto his 3 children. Bert loved karaoke- most notably for his bellowing rendition of Frank Sinatra's "My Way". His children would like to thank the nurses, aides, and other staff at Evergreen House Health Center for their unwavering devotion to their dad's care. He is survived by his son, Michael Brousseau, with whom he resided; his daughters, Melissa Brousseau and her partner Mary Ortiz-Rodriguez, and Stephanie Santucci and her husband Richard Santucci, Jr.; two brothers, Maurice Brousseau and Leo Brousseau; a sister, Gloria Ciesynski, and three grandchildren, Adam Brousseau, Zachary Santucci and Sophia Santucci. His funeral will be held Saturday, November 20, 2021 at 9 AM from the Maceroni Funeral Home, 1381 Smith St, North Providence, followed by a Mass of Christian Burial at 10 AM in St. Agnes Church, 100 Chatham St, Providence. Burial will be in Notre Dame Cemetery, Pawtucket. Visiting hours are Friday 4-8 PM. Masks are recommended for unvaccinated individuals.

Bertrand B. Brousseau, 71, of North Providence, passed away Sunday, November 14, 2021 at Evergreen House Health Center in East Providence with his family by his side and in his heart. He was the beloved husband of the late Nancy (Milinec) Brousseau,... View Obituary & Service Information

The family of Bertrand B. Brousseau created this Life Tributes page to make it easy to share your memories.

Bertrand B. Brousseau, 71, of North Providence, passed away Sunday,...

Send flowers to the Brousseau family.