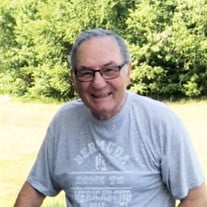 Anthony C. Stradone, 75, of Scituate, passed away peacefully on Monday, May 30, 2022. He was surrounded by his wife of forty-one years, Helen (Graves) Stradone and his two children, Deirdre Stradone and Anthony Stradone. Anthony was born on August 29, 1946 in Providence, RI to Guido and Concetta (DeRosa) Stradone. His childhood and teenage years on Federal Hill provided inspiration for the stories (and the occasional tall tale) he told for decades. He proudly served his country in the U.S. Army, including service during the Vietnam War, from 1966 to 1972. After his service with the Army, he became a member of the Rhode Island National Guard for twenty years. He graduated from Rhode Island College with a Bachelor's and Master's Degree in Education. He combined his love of cars and teaching to become the Automotive Instructor at William M. Davies, Jr. Career and Technical High School until retirement. Anthony was quick to smile, a natural on the dance floor, a budding artist, and a connoisseur of breakfasts at local Rhode Island diners. He was a generous and supportive husband, father, and friend - The first to offer his help, to volunteer at his children's long ago sporting events, and to act as a sous-chef to his wife's baking. He was happiest when surrounded by his family and friends. He is missed so much. Visitation will be held Monday morning, June 6, 2022, from 8:30 a.m. - 10 a.m. at the Maceroni Funeral Home, 1381 Smith St., North Providence, followed by a Mass of Christian Burial at 11 a.m. at Our Lady of Czenstochowa Church, Coventry. Burial with Military Honors will be at Rhode Island Veterans Memorial Cemetery, Exeter. In lieu of flowers, donations in Anthony's memory may be made to New Englanders Helping Our Veterans at nehov.org.

Anthony C. Stradone, 75, of Scituate, passed away peacefully on Monday, May 30, 2022. He was surrounded by his wife of forty-one years, Helen (Graves) Stradone and his two children, Deirdre Stradone and Anthony Stradone. Anthony was born... View Obituary & Service Information

The family of Anthony C. Stradone created this Life Tributes page to make it easy to share your memories.

Send flowers to the Stradone family.