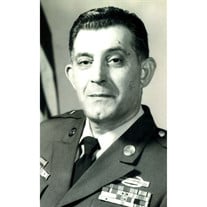 Command Sergeant Major Anthony J. Ferri, Jr., aged 93, died on January 12, 2021. A life-long resident of Providence, RI, he is survived by his wife of 70 years, Norma; his son, Anthony, and his wife, Linda; his grandchildren Steven, Lauren, Penny and Kelly; his 3 great-grandchildren Landon, Liam and Brooke; his niece Linda and nephews Vincent, Richard and Anthony. He is predeceased by his beloved daughter, Janice. Aside from his family, his greatest devotion was to the military where he curated his honorable military career record. He enlisted in the United States Army in March 1944 at the age of 17 being sent to the Philippines in January 1945, joining a battle hardened Rifle Squad, 2nd Platoon, 33rd Infantry Division. As the war ended he was assigned to the occupation forces of Japan. In 1950, Anthony was called upon to serve his country for 21 months, which included a tour in war-torn Korea. Upon his return from Korea, he remained active in the Army Reserve. Once again, he was called to active duty during the Cuban Missile Crisis. CSM Ferri, was dedicated to the advancement of all soldiers making himself available to their personal and career needs. He shared his leadership capabilities, knowledge and skill with unwavering dedication to them for 41 years until his military retirement. CSM Ferri was awarded the following decorations: Bronze Star Medal, Legion of Merit, Army Commendation Medal, Army Achievement Medal, Good Conduct Medal, American Campaign Medal, Asiatic Pacific Campaign Medal, World War II Victory Medal, Army Occupation Medal (Japan), Korean Service Medal, Armed Forces Reserve Medal, Army Components Achievement Medal, NCO Professional Development Ribbon, Army Service Ribbon, Philippine Liberation Ribbon, United Nations Service Ribbon, Presidential Unit Citation, Unit Citation (3), Combat Infantry Badge, Expert Infantry Badge. After his retirement, Tony continued his legacy of dedication and devotion to the armed services with his involvement with the Association of the United Army - Rhode Island Chapter that he served for five decades. CSM Ferri's pleasure was to present the annual "AUSA Award" to RI colleges and high school ROTC cadets as a means of recognizing their individual achievements. He was laid to rest in a private ceremony with military burial rites at St. Anne's Cemetery on January 19th, 2021. Command Sargent Major Anthony J. Ferri was a man who never forgot a name, and whose name shall never be forgotten.

The family of Anthony Joseph Ferri created this Life Tributes page to make it easy to share your memories.

Send flowers to the Ferri family.