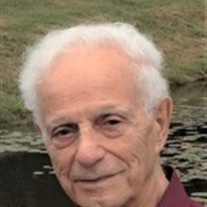 Alfred A. Feole, 98, of North Providence, passed away Monday, April 11, 2022, peacefully at home surrounded by his loving family. He was the beloved husband of Helen (Montaquila) Feole. Born in Providence, he was the son of the late Antonio and Angela (Gallo) Feole. Alfred had two passions close to his heart - his family and his naval service. He was a devoted husband and father whose priority was his family, and took pride in his effort to maintain their home for many years. Alfred served his country honorably in the US Navy aboard the USS Dickerson (APD21) during World War II which was destroyed by enemy fire on April 2, 1945 off Okinawa. As a gunner, it was his final responsibility to switch off the depth charges to ensure the safety of his crewmates. During the 1990s, he began speaking of his service time and sharing many stories, especially one about meeting his brother Pat in the Admiralty Islands. He became a member of the Tin Can Sailor Organization and the American Legion, and proudly wore his jacket and hat displaying his ship's name. After contacting Senator Reed's Office in 2005, we secured his medals which are proudly displayed with a photo of his ship. When the WWII Memorial opened, his 80th birthday present was a weekend trip to Washington, DC with his wife and daughter Marcia and her husband Dan to tour the Memorial and the Naval Archives. Several years later, he was contacted by the RI Fire Chiefs to join the Honor Flight "Lima" on a day trip to the Memorial accompanied by his son John, which coincided with the anniversary of the sinking of his ship. After the war, he began training as a master electrician with his brother Pat, but then chose to become a meat cutter owning his own market for a time. He then worked as a meat cutter at Star Market, eventually becoming department head. He was a member of Local 328 of the United Food & Commercial Workers International Union, AFL-CIO CLC for many years. Alfred was a longtime communicant of Saint Augustine Church. He was an avid reader of Baldacci, Clancy, and Patterson and enjoyed solving word search puzzles. His favorite hobby was making sausage and giving it away to family and friends. He looked forward to his monthly Friday luncheons at the Atwood Grill with "the guys" he worked with and attending yearly Game Dinners at the Sayles Hill Rod & Gun Club. Besides his wife of 72 years, he is survived by his son, John Feole and his wife Donna; his daughters, Marcia Harrop and her husband Daniel, Paula Feole, and Joan Davis and her husband Dennis Wielepski; eight grandchildren, Briana Gordon, Catherine and Jessica Davis, Gregory, Michael and Matthew Feole, and Sean Harrop and Eileen Dufrense, and nine great-grandchildren. Alfred was the brother of the late Louis and Pasquale Feole, Concetta Pellegrini, Vincenza Ignagni and Marian Castrignano. He is also survived by many nieces, nephews, and cousins. The family would like to express its most sincere and deep appreciation to Al's caregivers, Silvia, Mary, Elderise, and Isabella, and the teams from Bayada and HopeHealth Hospice & Palliative Care. Relative and friends are invited to attend his funeral to be held Tuesday, April 19, 2022 at 9 AM from the MACERONI FUNERAL HOME, 1381 Smith St., North Providence, followed by a Mass of Christian Burial at 10 AM in St. Augustine Church, 639 Mt. Pleasant Ave, Providence. Entombment with Military Honors will be at Highland Memorial Park, Johnston. Visiting hours are Monday, April 18, 2022, from 4-7 PM. In lieu of flowers, donations may be made in Alfred's memory to the Navy-Marine Corps Relief Society, 690 Peary St., Newport, RI 02841 (www.nmcrs.org) or the HopeHealth Hospice & Pallative Care, 1085 N Main St., Providence, RI 02904 (www.hopehealthco.org).

Alfred A. Feole, 98, of North Providence, passed away Monday, April 11, 2022, peacefully at home surrounded by his loving family. He was the beloved husband of Helen (Montaquila) Feole. Born in Providence, he was the son of the late Antonio... View Obituary & Service Information

The family of Alfred A. Feole created this Life Tributes page to make it easy to share your memories.

Alfred A. Feole, 98, of North Providence, passed away Monday,...

Send flowers to the Feole family.